Face it, my fellow humans born with egos, besides people in a forest there are a lot of other creatures always present to hear a tree fall; birds, deer, bears, dwarves, elves, fairies, other trees, etc. But a film that never reaches an audience is far quieter than the proverbial witness-free tree.

To get that last stat of 300 hours of new content added per minute per day to sink in, think of it this way: If a person devoted all their waking hours to being current on just one minute of new YouTube content it would take that viewer 3 weeks of dawn to dusk viewing. Accomplished only by eating all their meals at the computer screen and using a bed pan for rest room breaks.

Getting the grim picture for independent content creators? So the only solution to getting an important film like THE COOLEST MEDITATION EVER: ANTARCTICA 12.12.12 out to as many hearts and souls as possible is an ample ad and marketing budget.

Let’s back up for a minute. Why is this experimental meditation film, made on a shoestring budget and filmed in Antarctica in 2012, important for people to see? Simple. The film, a collection of 24 meditations, all done 9 days in advance of the end of the Mayan calendar, set intentions for evolution human consciousness. When people see the movie it’s an anchoring-in and activation.

That’s the serious “Why?” The film is a paradoxically whimsical creation that strives not take itself too seriously. 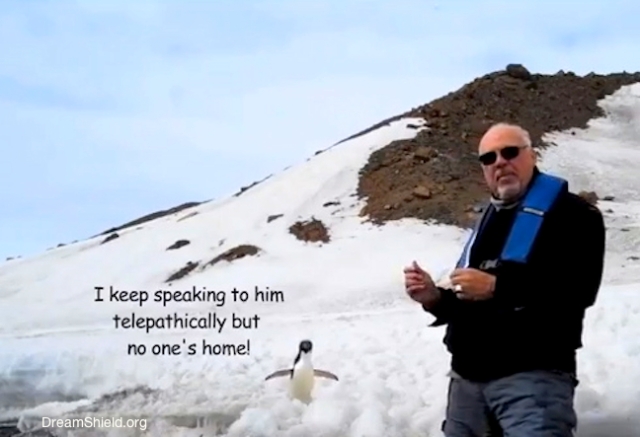 Back to the topic at hand. Ads cost big money and are the only way to get this movie out to the world. Next, crowd funding is the only way to fund our ads budget, as no studio is going to be interested in a movie about a man having visions of ETs that pestered him in dreams all the way to Antarctica by 12.12.12 to head the Mayan calendar off at the pass. But crowd funding is a swollen field too as there are so many wonderful independent films out there.

My solution? Copy the PBS, where I had a prime time show air in 2000, fund raising model of giving valuable prizes for support dollars. When I came up with this idea, after much wringing of hands, late 2015, in the week between Xmas and New Year’s, little did I realize I would attract not one but three giants of spirit science to grant us products from their lines to offer as prizes.

The result for The Coolest Meditation Ever is the most successful pre-launch for film crowd funder to date I know about.  I am pleased to report that our snowball approach grows our ads war chest daily. Contributors are loving prizes from scientist Patrick Flanagan, sonic healer Jonathan Goldman and cosmic coach James Wanless.

Adding luster to our coolest ever prize packages is the fact all contributions to our film starting late last year are tax deductible! This is thanks to my soulmate Elizabeth England who, in addition to connecting me to James Wanless, introduced me to Carol Dean of From the Heart Productions who became our fiscal sponsor and presto tax deductible prizes.

BTW, read about how this project actually helped bring about Elizabeth and I becoming a couple with some help from the ET spirit Ohom.

You can see our trailer and learn about all the coolest prizes from our titans of spirit science. Cool thing is all prizes are available right now, well in advance of our 4.4.16 crowd funder launch on Indiegogo, at CoolestMeditationEver.com