“Suppose, then, that all men were sick or deranged, save one or two of them who were healthy and of right mind. It would then be the latter two who would be thought to be sick and deranged and the former not!”
(Aristotle, Metaphysics 340BC)

Back in early July, I channeled my ET higher self Ohom to invite him to my UFO Skywatch on July 14th.  But as you see in this video Ohom declined the invite because humanity has a virus, an insanity virus to be precise.

So when the spaceships did not come when July 14th arrived I was sad but not surprised.  Humans as a species are terrifying to the ETs who see us as a greedy beings wrecking its own world, murdering each other and all life on this planet.  Witness last month’s Batman killings for sheer madness with no point but violence itself, or as recent as today’s massacre at a Sihk temple in my home state of Wisconsin.

Over the past seven months, based at Great Spirits Ranch, both on and off the ranch, I’ve witnessed insanity and drug abuse in the liberal left Light Worker community, and to the far right, equally bizarre behavior.  In myself I’ve battled jealousy, ego and depression.  In other words as ranch owner Deb Malmazada is famed for saying, “We are all f’ked up in (human) form.”

I was losing hope entirely for a gentle shift of 2012 when one morning a 4AM the soft echoing voice of Ohom, my higher ET self and guide, woke me from a deep slumber. “Ken, we want to test a cure for the human insanity virus on you.  Go to your faucet with your DreamShield coffee mug and get some fresh water.”

I’ve learned it’s far easier to comply with these odd requests, did as I was asked, and drank.  The 11.11.11 DreamShield mug glowed faintly in the darkness of the early morning as I placed the mug back on the RVs little night stand shelf and went instantly back to sleep.

I soon found myself in dream.  I was running through a strange yet familiar structure, running from a demon.  The demon, I somehow realized for the first time in a lifetime filled with these sorts of nightmares, was my own negative energy.  So I stopped in archway and turned to face my dark side.  The demon overtook me and my face twisted into monstrous forms. I panicked as leathery skin spread across my body.  Bat like wings erupted from my back and razor claws burst painfully from my finger tips.

Despite my terror, I willed myself to stay in the dream.  Pressure drummed in my ears until I thought my head would explode.  But in time, I have no idea how long this inner battle went on, I was able to integrate all the dark energy.  The horrific images of demonic transformation faded.  I looked at myself in a mirror in the dream, myself once more, only stronger.  A new twinkle in my eyes.

A voice called me to wakefulness with a mild Russian accent, “How is it you are feeling, Ken?”

“Like a Mac truck ran me over.  Thanks.  Is this my Russian physicist self from the 19th century the Damanhur have told me about?” I asked the voice.

“Da.  I am interested in how your ego has been affected by the waters,” the voice replied in good humor.

Confused on how I could be in the present and past at the same time I surrendered to the moment and simply answered, “I’ll get back to you, comrade.” 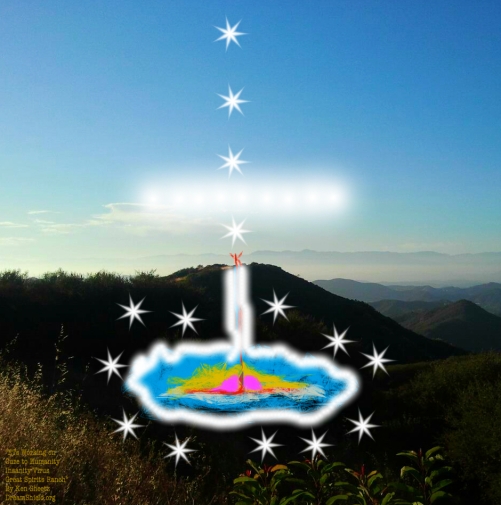 “Take heart, Dreamer.  The negativity visiting upon you, it is absorbed into the crystal caverns and waters below Great Spirits Ranch.   There, I and the team of ET scientists work day and night for the cure to the human insanity virus.

The virus, it is a mutation of the ancient Black Plague. It is sneaky and hides in the folds of the human brain. Look for yourself, Ken!” the voice echoed in my head .

I went into meditation and watched the dark recesses of my brain folds begin to light up with blue white light.  The cure was changing me.  But would it work?

When that long night’s labors ended, seems I work 24 hours some days, it was about 7:30 am.  I did my morning rituals as the birds sang, cleaned up after breakfast and commuted the 100 yards from the RV to my amazing office here at the ranch atop Malibu.

How, I wondered as I walked past the flowers and trees that adorn my commute, could people make themselves, human f’cked up in form me included,  make life, even here in a Malibu paradise, so miserable?  No wonder in the Bible stories God finally kicks out Adam and Eve out of Eden!  We are a contentious cantankerous lot.

After completing my agreed to 4 hours per day of social media, that pays my room and board at the ranch, and at various other places I’ve been blessed to visit these past two years since seeing my first visions in Italy, I decided I needed a break from the electronic world.

So I volunteered to help Deb, and new ranch hand Jason, with some manual labor.  We cleared brush from one of the patio areas where a new TV show’s cast and crew would be dinning over the weekend.  A short while into the work, Deb turned to me and said in her harsh yet straight forward style she is famed for, in her Maryland east coast accent she has never lost despite coming to LA as a kid, “I gotta end the board part of our bargain.  You’ll have to buy your own groceries from now on.  And I we need to rework our whole bargain soon.  I just don’t see the value of social media for my ranch.”

I could tell Deb was expecting a big scene from me, something she relishes in her cathartic way she provokes people’s issues to the surface.  But much as it stung what Deb was saying, I simply shrugged while gathering leaves and said, “OK.  Let’s figure something else out, Deb.  All I know is I want to stay on the ranch a while longer.”

My simple peaceful reaction to Deb’s words, without debate, was exciting progress for Mr. Debate here. We both felt a thrill in my change of style and happily finished our gardening together.  Deb made fabulous sandwiches for lunch to celebrate my victory over anger and ego.

I continue seeing things occurring on the ranch, the world and myself that show me the cure is far from perfected,  but I am hopeful that one morning I’ll be awoken again by Ohom’s voice to drink the waters of the ranch and the cure to the human insanity virus, devouring our world from the inside out, will at last be at hand.