Most of the shadows or this life are caused by our standing in our own sunshine. ~Ralph Waldo Emerson

11.11.11 was here at last.  The date that I’d been getting messages to hold a DreamShield event on since 5.5.10, when I saw the 7 foot tall blue angels build a force field around earth that was capable of harnessing the mass consciousness of humanity to protect this world and help manifest a gentle 2012.  Looking at the sentence I just wrote, I still have a hard time believing the 30 some events attended by so many now and recorded on YouTube in over 200 videos from around the world in just 18 months has really happened.

Really, I don’t proclaim to believe to know what’s behind any of my visions, could be anything from a tumor to the real thing, angels from outer space, and here was all this happening and much more to come.  And happening to a man not used to the public spotlight.  A filmmaker who prefers to stay behind the camera rather than in front.

Unfortunately, come 11.11.11 I had been so busy helping put this event together, from securing our location event sponsor EARTH SHIFT PRODUCTS, also our 10.10.10 sponsor and to whom we are eternally grateful, to using my old architectural skills of making floor plans to marketing, via my social media company BuzzBroz, to arranging video production gear for the day, planning interviews with exhibitors and much more, that I’d not given much thought to my part in the ceremonies Laura De León had planned so impeccably for the day, but, out of love and respect, had left me the space to plan by myself.  And I’d planned nothing.

What the heck would I do on stage, in front of all these people who had paid to be here, if I saw no angels?  Sing karaoke?  Do a card trick?  I’d actually had one in my pocket I was not very good at.   It felt like one of those college exam dreams where you lost your speech and had to go on before the class, naked.

Fortunately, Laura had plenty more wonders for the people to experience that day than me if I bombed.   As Laura’s day of amazing workshops on ascension minded topics drew to a close I took to the stage and looked at the enthused crowd.   A crowd that would have been larger but for the rains that were now starting to patter on the beautiful big tent that I thanked the angels was here for us.  I’d been angry with the angels all week during the lousy weather forecasts. It hardly ever rains in California.  Why rain and cool weather on this magical day of 11.11.11?

A voice kept assuring me, ” All is as it should be, Ken.  These fine group of people who braved the weather are just what this meditation to unlock the 11th vault needs.”

“Easy for the angels to say,” I raged inwardly at the voice within me.  “ETs and angels have no need for money.  This rain means I just worked 15 hour days for three months without a day off without a pay day.  Angels are lousy bosses.”

Very small of me, I know, chewing out angels.  They don’t call me the Larry David of the spirit world for nothing!  All my spiritual growth of the past 18 months was out the window.  So when Laura asked if I could speed things up on my meditation as the night was already behind schedule, well, this did not help my disposition.  Ironically, the theme of the night was Laura’s brilliant idea of humanity ascending from ego consciousness to living from the heart, and here I was having a ego trip about being rushed at my own event.

Yes, my angels love comedy.  It’s a galactic reality show I feel at times with all of us as human cameras, cameras that also have every human sense recorded for the galactic audience to relish in.  Kinda like THE MATRIX meets THE TRUMAN SHOW.  At times, frankly it pisses me off to be laughed at so much.  But ETs, as Jackie Salvitti of ETHEALING.COM, one of our night’s featured speakers, says, “ETs have a great sense of humor.”

It explains much.  How boring watching us would be if our weather were perfect.  Yeah, angels are stinkers that throw challenges at us that would make any reality show producer blush.  You heard it here first.

But all my doubts and ego subsided as I looked over the beautiful crowd of eager happy faces in the tent.  Honestly, Ive done a lot of public speaking in business and attended many events, but in all my 30 years of that corporate junk I’ve never seen a crowd as open as receptive and beautiful as the one gathered under the tent at Rancho De Las Palmas. The stinker angels were right.  This was the perfect crowd to meditate on opeing the hearts of banks.

Then suddenly, as the crowd’s passion picked me up off my grouchy butt, dozens blue angels materialized, filling every the empty white seat scattered in the crowd.  As I reported this news of ET angels joining the 11th Vault meditation, a thrill went through the gathering.

Now, I began to see earth from space and the golden vault door that was hiding the heart of earth’s banks.  This earth-size safe cracking was a mammoth job I told the meditating crowd.  Honestly, folks.  Whatever it is we are we are far more powerful than we know.  I could feel the energy of the crowd willing the vault to open.   The crowd’s energy filled my exhausted body with vitality and I knew in that moment what has kept old performers like the Stones young and alive.

Next, I saw millions of angels pulling at the golden door.  I shouted joyously the meditating crowd, “Imagine if we can open the vault and warm the heart of the banks! Banks with a heart would no longer fund wars, fund polluters! Banks with a heart would no longer steal peoples homes, impoverish us and would instead of enrich us.  At 11:11 PM let’s open the vault!”  I left the stage to applause, drained of my last reserves but feeling the energy of the crowd and angels building.

Laura turned to me as I took my seat and said, “Wow.”  Which made me feel a whole lot better.  I was almost myself again.

As the amazing night continued, the vision built.  At Aros’ dolphin mediation I caught a glimpse of lasers cutting the vault. At Jackie Salvitti’s amazing ET healing I saw my higher angel self with a stethoscope trying to break the combo. At Renato Longato’s amazing speech about ETs and their role in 2012 I saw the circular pavilion, where the exhibitors worked flawlessly during the day, become a giant spaceship pumping energy to the DreamShield, where the White Tree of 10.10.10 still stood.

And rather than seeing something, during Laura’s amazing singing with Philippo Francnhini, I felt a spark of something new ignite in my heart.  A spark that is still growing.

Finally, as Laura conducted the 11:11 PM mediation I closed my eyes and instantly saw the angels work reach its climax: The vault turned red-hot and simply vaporized in a shimmering wave.  Laura handed me the mic and asked me to report what I saw to the crowd.

“The angels melted the vault.”

6 moths of meditations on opening the vault to hearts of Earth’s banks,  some very painful and poignant, but for the final vault this was all there was to it?  I was hoping to see more!

But the crowd cheered and danced for joy in the puddles that seeped under the beautiful tent.  I took a seat, too tired to enjoy the fun and wondering where was the heart of the banks?  I expected the banks to have a heart, my theory, as explained in the video above, that since the corporations have fought to recognized as living beings that this would mean they have a heart was kaput.  And I’ve seen the hearts of Apple and Disney and warmed them in past meditations with angels.  Now here, blessedly, there was only Gia, Mother Earth, free of the banks that had been sucking off her like a vampire.  But no bank heart to be found!

I can only conclude one of two things from the no heart scenario.  One, the heart is hidden somewhere on this world or, two, and very chilling, that banks are truly as heartless as they seem.  I prefer to think the heart of banks are hidden and that my higher self with the aid of the angels will find that heart and warm it.  Ever since 11.11.11 I have been doing just that in meditations.  Still not even a clue.  God knows we need to find that heart!

Back to the 11.11.11 fun and a moment that stunned me.  A couple that were in human form, but of other worldly height and perfection of form came up to me and congratulated me on the meditation with warm hugs.  The male must have been 7 feet tall and the woman a good 6 foot plus.  I asked if I could take a picture, thinking they were ETs, and they said yes.  I turned to get my camera out of my pocket but when I looked up they were gone. 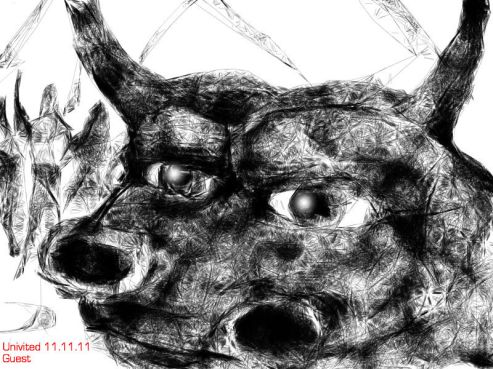 After working until 2 AM to pack up the event and collapsing into bed at the hotel in that exhausted state where visions come easily, I saw to my shock that a beast had been in our midst as the crowd danced!  Our uninvited hairy guest was big and ugly, with the head of a black bull!  I’ve been told by my spirit guides that this Minotaur was an angry Wall Street spirit guarding the 11th vault.  Defeated, it was lost and out of job.

My spirit guide Angus assured my fearful mind that the confused beast was quickly tossed out of the tent by his Galactic enforcer clan, a vision to itself.  I’d not seen any of this in real time as I was too tired.

Was I imagining this beast?  Well, a few days later Laura would email me, without having heard my after vision story of the uninvited guest, that she had clearly heard a beast-like grunt come from near me.

And this after-vision of the Wall Street Minotaur would be just the start.  There was much more to the visions of 11.11.11 to come in the following days and weeks.

12.12.12 is the last primary date the voice in Italy has told me must be honored to power the DreamShield for the completion of this gentle 2012 mission on 12.21.12.  This will be a 10 day long symposium where all we have learned from 10.10.10 and 11.11.11 and other of the smaller events will be put to work.  We’re going to have this one somewhere warm and dry tropical, Hawaii.  Ha!  Try to make Hawaii’s weather funny, angels!  Oh, wait, volcanoes.  Never tempt angels.  Sorry, guys.

Too early for advanced 12.12.12 tickets, but stay tuned as I work on venue and sponsors, this time giving myself a full year to get this stuff done so I can enjoy myself at my own event!  Meanwhile, however, your love donations at DreamShield.org at the PayPal link on the page help me report work on the angel visions which, hopefully with your help, I will one day gather into a book.

And stay tuned as well for a February the rescheduling of Renato’s DreamShield UFO Sky Watch which was rained out on 11.11.11!