My partner in love and life Elizabeth England and I have been on the road the majority of our lives since May. We’re touring our film THE COOLEST MEDITATION EVER: ANTARCTICA 12.12.12 (CME), already online at DoPenguinsMeditate.com and available as a DVD on Amazon.

We call the tour ‘Movie and a Meditation.’ We are the first filmmakers, as far as we know, to combine a movie with a live guided meditation. We must be doing something right because I am pleased to see we already have some copy cats starting to do it also. Movies have always been a meditation for me–a place where I can let go of current reality and imagine being the hero of a film.  So cool to be the hero of this film and share how Antarctica brought my love Elizabeth into my life.

After a very typical Q&A about this very untypical film (about meditations guided by highly evolved thought-traveling ET energies who sent me to Antarctica in 2012 amidst the hype of the end of the Mayan calendar), Elizabeth, a talented Kirtan performer, yogini and meditation expert in her own right, leads a live planetary healing meditation.

So far we’ve brought our ‘Movie and a Meditation’ events to:

We met amazing people on the journey like famed sonic healers and authors Jonathan and Andi Goldman, who co-hosted our Boulder Colorado premier on August 1st. We were blessed to have the Et toning team of Anara Whitebear and Chris Katsaropoulos, our Durango pals, on board to open the energies of the night.

The hit Boulder premiere was held at the prestigious Etown theater. We opened with a Kombucha and cheese reception that Elizabeth, who worked for Martha Stuart for 3 years, pulled off to perfection.

On the road same time as our sweet little movie and meditation event, strangely running for a 2020 reelection none of us want to think about yet, was Donald John Trump. To stay in the media spotlight his ego demands, Trump is going further and further into using fear and anger. And so we found ourselves doing meditations to counter fears of nuclear war with North Korea Trump fomented on Twitter and the hate he rankled into the consciousness with his “many sides” stance on Charlottesville.

Unlike Trump, we don’t have a private jet or a vast PR machine to blast ourselves into the mass consciousness.  We use our meditations and little events to reach the masses.  A slower and gentler process, it’s nonetheless powerful.

Elizabeth and I, now plus our nervous rescue dog Lincoln, who does not tolerate pet sitters well, traveled along with us in our 2011 Jeep Wrangler. We just cracked 108,000 miles on the odometer thanks to the 10,000 miles we’ve put on the dependable Jeep since May showing our film.

Our crowds, compared to Trump’s, are tiny, maxing out at 100+ . Raising consciousness in this time of dumbing down is not easy. It’s always better to light a candle than curse the darkness.

Speaking of darkness, at the ill-advised Phoenix rally last night, day one post-eclipse and drawing big crowds from the right and left, Trump was consumed by defending his racist rollercoaster ride of reactions to the Charlottesville tragedy. The enemy in all this?  Not the Nazis, the press, according to Trump.  Well, as a man I voted for, Ronald Reagan once said in debate, “There he goes again.”  And there I went again with 24 hours of meditations to set intention for the Phoenix event to pass without the loss of another life.

And it happened. Some skirmishes but no deaths in the face of president ignoring the wishes of mayor concerned for his city with a 40% Hispanic population. I am proud to say I feel we helped. Meditation has been proven scientifically to reduce crime and violence in major studies.

Our movie and meditation and web work, we are proud to say, is all about love and the belief that all of us make a difference in the field of consciousness.  How ironic that a film about the possibility, however ‘far out’ as we acknowledge in the film, of an ET-thought-traveler who is helped humanity by guiding our meditations in Antarctica and beyond,  is more real and sincere than our current president’s script. 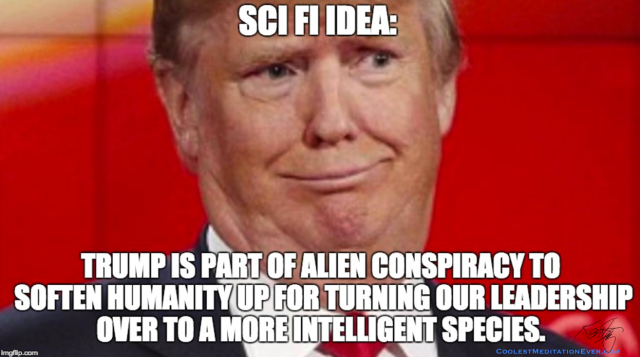