For small creatures such as we the vastness is bearable only through love.  – Carl Sagan

I’m not talking about my birthday visits yesterday.  A birthday filled with love, my best ever.  The day started with clearing cobwebs 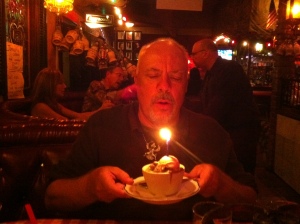 from the former horse stables, where I am staying at though the big 11/11/11 DreamShield.org event,  as my daily chore, then a 20 miles bike ride to Laura de Leon’s, my partner in DreamShield, where I was greeted with a rendition of Happy birthday by Laura and her husband Bob, then quickly off to a session with Philippo Franchini to rehearse a song about transformation that Laura composed over 20 years ago that I filmed, then an amazing coffee where Laura did an amazing healing for my inner child, a birthday dinner with Bob an Laura at Miceli’s where Peter Pergelides sang a hilarious birthday rendition and fianlly watching one of my favortie spiritual films HOLY SMOKE on the amazing home theater at Bob and Laura’s.

No, not about my birthday visit but my father’s.  Dad passed of cancer on January 17th of this year, just before I left to meditate on closing the Bermuda Triangle.

A mysterious place many experts believe is a failed ancient alien experiment that caused the fall of Atlantis and all of our wars.  My father’s ghost was with aboard ship with me and cheered me on all through the three nights of meditations.  Stormy nights where I was blessed, Dad at my side, who had clad me in ethereal armor the former welder had made himself, to witness the angels battle the dark forces and triumph in closing the evil triangle for once and all.

There were many more visits from my father’s spirit all the way through March, one where he applied a blue angelic balm to my back to heal psychic wounds of a childhood trauma he put me through.  His apology and the balm worked wonders on healing my heart.

The last visit from my father’s ghost had been on May 5, 2011 when he appeared during a meditation. Dad gave me 12 horses and a golden chariot as a one year anniversary present of the day I saw the angels build an energetic shield around the planet while deep in meditation in a yoga hall that was a former horse stable in Italy.

This morning, a day before dad’s birthday, a new rescue dog, that Laura and Bob took in from a fellow light worker who needed a home for her pooch as she was to be traveling the world through 2012 and who they renamed Zoe because it was named Bella, same as their first rescue dog – this couple have amazing hearts – woke me a 6 AM to go outside.

Half asleep, I walked Zoe out into Bob and Laura’s backyard paradise where we’ve hosted many DreamShield events.  My father’s distinctive regular Joe voice came to me.

I smiled.  Glad to hear his voice again after all these months. “And you too, for tomorrow, Dad.  The Equinox falls on yours this year.”

“I know,” Dad’s voice echoed in my head.  “And there’s a big surprise coming.”

“In honor of your birthday?”

“Nah.  The Equinox, ” he chuckled in a way that used to annoy me like it was a put down. Something the former drill segeant did too often in life.  But joyously there was no pain in my heart from his teasing,  “Something big for the world happens tomorrow.”

“Can you be more specific, Dad?”

Never great with secrets Dad quickly hinted,”OK, it’s your birthday, so I will tell big stuff will happen in many places in the world and especially America.”

“Where?” I asked, realizing sounding like I was more a reporter than a son talking to his dead father so I added. “Please, Dad, give me another hint.”

“First contact with ETs?!” I said out loud I was so excited.  Zoe looked over from where she was sniffing on the other side of the pool.

Just then I noticed Zoe had disappeared.  It shook me from my contact with Dad.  There are hungry coyotes in the hills here in Studio City and Zoe would make a tasty breakfast for the beasts who roamed these hills long before even the Native American did.

I began soflty calling for the little white dog, not wanting to wake my hosts.  After an sleepy search of the property I found the little dog had scratched on Laura’s door and was safely tucked away on Laura’s bed.  Laura was startled as I peered in the door.  It was only 6AM and so she asked to go back to sleep.  So I decided to share the message from my dad, who says he likes Laura, over breakfast with my hosts before I bike back to BushWillows and the converted horse stables I am living in through the 11/11/11 event Laura and I have named The Ascension Convention.

Morning, earth.  Look to the skies tomorrow and fear not.  If I guessed right from my Dad’s hints right we are to experience first contact on the Equinox tomorrow.  But if I guessed wrong and Dad was pranking me, something he loved to do endlessly in life, it was good to hear from my father anyway and bask in my best birthday ever.

After note.  I guessed wrong.  My dad was talking about the NASA satellite the size of a bus that fell to earth at 3AM PST the 24th of September, his birthday, off the Pacific coast of America.