– I was surfing TV the other day and came across, I am sure not by accident, a treasure of classic film from the 40s, ANGELS IN THE OUTFIELD.  Which I found much better than the modern version. And I was struck by how much my life these days is like the grouchy manager of the movie’s ball team whose life is magically and wonderfully turned upside down by angels.

That’s right.  If I were making DreamShield as a movie, and I am a filmmaker, my line would be. “I see angels.”

Only a few short weeks ago I felt compelled to honor the vision I had in Italy on 10/10/10 (more on that to come in future blogs so subscribe).   How would it ever come together without money or time I wondered for my social media company BuzzBroz, less than a year old with one full time employee, me?  Mica Monet, an angel channeler, said all I had to do was start asking for help and it would come together. 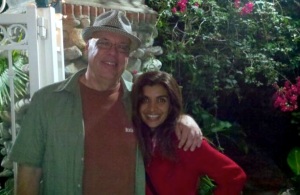 Now, my idea for honoring the vision, computer nerd that I am, was to have people do 10 second meditations at their computers at 10AM and 10PM in all 24 time zones.  But earthly angels from Italy, Greece, Nashville and LA staged live events ranging from 1 hour to 3 days!  So now I had the added job to learn the technology to cover them non-stop for 24 hours.

Somehow everything I needed was already in place and somehow my baby operation BuzzBroz brought in just enough paying work to pull it all off.  Truly, after building Oprah’s Harpo Studios and $162 million skyscrapers, I’ve never seen so much done in so little time for so little money.  A week after 10/10/10 as I write, it’s almost hard to believe it really happened.

Special thanks to not one but two doctors who made LA’s 10/10/10 event a hit, Dr. Sarah Larsen (pictured right with me), who created and hosted, and Dr. Robert Cassar who donated the use of his amazing 15 acre Rancho De Las Palmas for the day. We covered the event and had live broadcasts that magically began to work, despite the fact we only had 3G Sprint coverage, as the day progressed.

Despite my nerdish tendencies I knew that the spiritual aspects of this day came first. And at 10AM and 10 PM I helped Dr. Sarah lead meditations to sow the seeds for a gentle 2012. That seed angelically took root and I had another vision…

As Dr. Sarah’s adorable 6 year-old daughter Jazzy’s voice led our OM chanting, where about 20 of us were seated in a center ring of chairs I’d arranged, inside of two rings chairs we set up to invite in the angels, I saw angels fill the hall. The angels, hundreds of them, put forth the hands to fill us with a blue

energy. I then saw the hall ceiling opening like a crown of white twigs.

A great white tree grew rapidly in size and power in the center of our group, fed by blue energy that pulsed from the angels though us. The morning mediation powered the arches and that with all the many scared symbols, crystals embedded all over the property, fed the tree along with the healers. The great white tree pulsed with powerful luminous white energy with each OM! The white tree rocketed up and over the orange grid of LA to the edge of space.

The DreamShield was powered up.

Such great success with so little money but lots of help, and lots of work and lots of angels. Nothing this sometimes grouchy regular Joe from Chicago would have believed six months ago. We did the impossible and put on the first of many global DreamShield events! Thanks also to angel sponsors SpiritRecovery.com and PrincessKnowitAll.com, on whose wings the 10/10/10 global events were sent flying towards a gentle 2012.