As the right and left media roils for ratings in this strange era’s, love him or hate him, craziest presidency ever, I just received some surprising insights from my ET spirit guide Ohom (Open Heart Open Mind) as to what our meditations in 2017 at the Trump inauguration looked like on spirit plane. 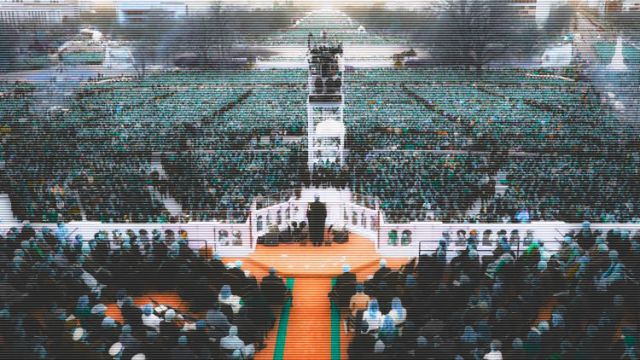 It’s January 20, 2017 again. Elizabeth and I nervously stand amongst the mostly MAGA hat wearing crowd, sporting instead our CME penguin hats. Each time Hillary appears on camera the crowd jeers, “Lock her up!”

Two grizzled beer drinkers jeer each time Obama or Michelle appear on the Jumbo-tron nearby. It’s an ugly scene. Neither Elizabeth or I really want to be here. This is not the America we grew up in. And it is especially not the one Elizabeth served 17 years in the military to defend.

But we have dutifully followed Ohom’s simple instructions to go to this “largest ever” inauguration, and hold space of love for Trump in this power intoxicated crowd. We do our best to bless Trump’s presidency; that it ultimately be good for the planet, or to at very least do as little harm as possible.

Oddly, I sense this crowd, one that should be elated on this first day of the Trump administration, is deeply defensive. They literally can’t seem to believe their man Trump really won, even though he’s up on the big stage getting sworn in; Melania frowning behind his back on the Jumbo-tron screen perched atop scaffolding. 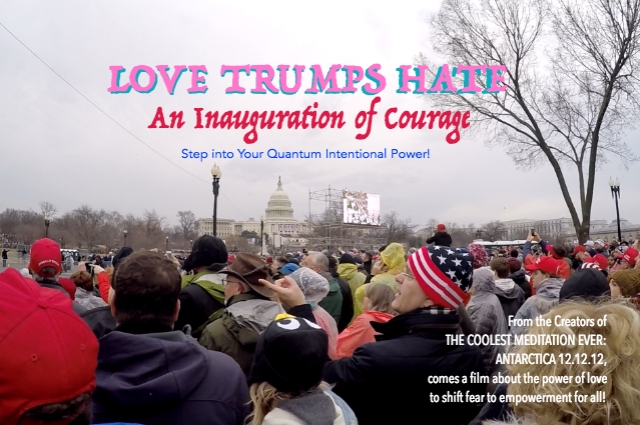 But there something’s very different in this particular meditation replay of the inauguration. A mental replay I’ve run countless times for over 2 years now, trying to make sense of what our crazy mission accomplished in the light of destructive programs for the environment and humanism rolling out almost daily from Trump via Twitter.

Today Ohom is finally showing me what really happened energetically that fateful day, sealed within the scared Masonic geometry layout of DC. Deep within the low vibrational inaugural crowd, cozy in our own bubble of bliss, sweet Elizabeth and I hold a space of love; just as Ohom guided.

Our loving  meditation crystalizes moisture from the light rain that begins to fall. Our love meditation becomes a diamond-seed that burrows into the wet grass beneath our cold feet. Soon a translucent white energy tree rapidly grows beneath Elizabeth and me. The rapidly growing energy tree sweeps us high above the bristling Trump clan.

My view to the dais greatly improved, I gaze towards the red-faced Donald J. Trump giving a speech former president Bush later observed, “That was some weird shit.”

Agreed. To me this all feels like the birth of the apocalyptic era right out of FALLOUT THREE; a video game that takes place in a mutated and ruined Washington DC 200 years after World War III.

Looking ahead to the dais, I see two other white energy trees carrying other pairs of meditators high above the oddly fidgety crowd.  I wonder to myself, “Maybe the Trump fans are nervous they elected a thin-skinned guy with his trigger finger on the largest nuclear arsenal in history?”

Amazed by this new feeling compassion towards the desperate-for-change Trump’s base, I look back towards the Washington monument. Nine other white trees carrying meditation pairs grow rapidly. The procession of 12 inner lighted white trees leads all the way from the dais to the Lincoln Memorial.

The wise Ohom never let any of our teams know we are working as a meditation group of 12 tree riding pairs until now. I may never know their names, but Ohom tells me the dozen meditation teams represent all races, male and female, and sexual orientation.

Soon, all twelve energy trees are large enough to join their rapidly leafing branches above us the meditation teams. Loving energy pulses through the umbrella of white trees, downloading into the anxious crowd below.

Now all of our teams of meditators hold space for one thing: that the Trump presidency, messy as its likely to be, never result in a launch of World War III.

Ohom tells me telepathically as I write, “Take heart, Ken. All of Trump’s many disconcerting acts he has and is yet to commit during his  presidency are in actuality a sacrifice to your planetary conscious.  The Mars energy of war that has dominated your world since the fall of Atlantis is dying. Trump is but a servant to accelerate its end.”

Even knowing I’ll fail to recall all this and fall at times into anger at Trump’s efforts to get our collective goat, I feel blessed to finally have this gorgeous vision to wrap my head around as to Trump’s higher purpose and hope you do too. This has been a tough two years for we moderates, plus liberals and many conservatives alike.

But whether it’s 2 or 6 years  until the Trump era finally ends, the blink of an eye in the cosmic grand scheme, look for an overnight flip to the next era. One that will make the loving 60s look passe!

And as the barrage of negative news and policies continues 24/7, I suggest you tune out to the ratings driven chatter and join with us in meditation for a better tomorrow. Vote when the time comes but don’t obsess over all this until November 3, 2020 is closer. Advice to myself as much as you, dear reader. Please watch the film if you’ve not seen yet or to refresh the 24 planetary healing meditations today!

One thought on “THE BIG PICTURE BEHIND TRUMP’S PRESIDENCY”