If you’re new to the blog you know I’ve been given the monumental task of holding a space for love in the collective consciousness for, of all people, one Donald J. Trump. I was assigned this odd challenge, a nearly impossible task for an independent voter like me, by an intergalactic spirit guide named OHOM; short for Open Heart Open Mind.

Loving Trump and his equally off key followers is a lesson OHOM tells me is needed for the planet and my own mastery.  I can hear my Irish grandmother, warning from the afterlife, “See, Kenny. I told you not to talk to ghosts!” To which I reply back, “But aren’t you ghost now Grandma?” Silence.

It’s, as you can imagine, a super tough mission. Tougher even than my 2012 trip to do 24 meditations, one dedicated to each time zone of the world, as near as I could get to the South Pole in Antarctica. Shameless plug, I filmed the adventure and it’s become a cult hit in the conscious community. In fact. conscious leader, world famed psychic Maladoma Some’ PhD, in a private session, predicted my Antarctica meditations will be admired and studied for decades. 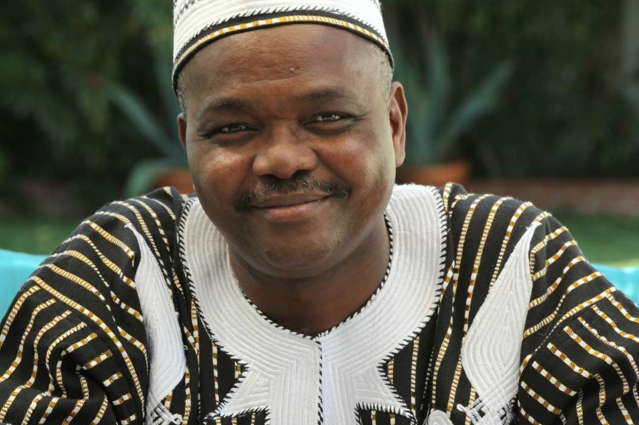 While OHOM, on the other hand, tells me quite the opposite. The blue-skinned ET advised me before I even set out for Antarctica that few people will ever believe the twenty-four 12.12.12 meditations, which we co-created in the land of ice and snow, will ever get much recognition for what any planetary good they did.

I’m cool with either prediction. You can the watch the movie here.  THE COOLEST MEDITATION EVER: ANTARCTICA 12.12.12 has, so far, toured the Southwest US, sometimes to sold out crowds or to nearly empty theaters. Thereby manifesting both realties of the Some’ and OHOM predictions at once.

Anyway, back to my testy love assignment for the benefit of, “Mr. How in the Hell Can He Still be President?” As I mentioned earlier, I’ve been assigned the “uber” tough task to hold space of love for Trump, along with his protestor punching followers. Sometimes, I almost succeed with help of my yogini Elizabeth, who went to the Trump Inauguration with me. 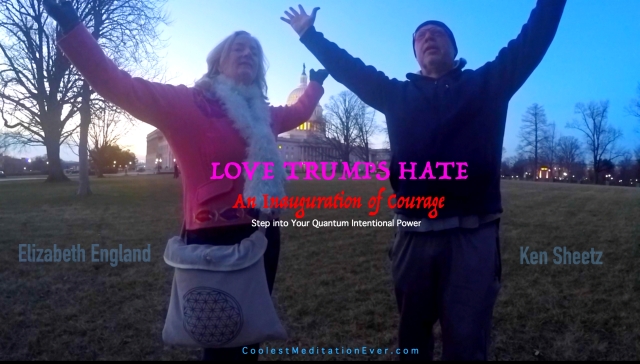 But most times it’s far too easy to fall into anger. Give me a break please, because I’ve not liked Trump since reading his dickish book THE ART OF THE DEAL in the 80s. Not to mention a 24/7 mass media Trump feeding frenzy none of us can escape.

So I’ve been asking for help a lot these past two years. Spirit guide Robin Williams told me in 2016, reported here on the blog, that Trump’s presidency would be hilarious. True at times. Terribly not true most times. But the great comic spirit has been short on material for me. Perhaps his current incarnation as a killer whale makes him less funny? Sorry, Robin.

Yeah, Trump is even tough for comedy master Williams to cope with.  For example, Trump appearance at the UN where he was a laughing stock for bragging he’s America’s best prez ever. Later he claimed he was playing the UN crowd for laughs. I call BS. The man does love his lies. I saw the crowd began laughing at Trump then laughed deep in relief when the isolationist dictator wannabe took it in stride.

Happily, last night I scored some fresh inspiration to help with the thorny meditations on Trump. It came in the form of author and comedian Steve Bhaermna, whose stage names is Swami Beyondananda. He had the crowd in stitches at the Sedona Creative Life Center last night. He’s the author of funny, yet deep, book called SWAMI FOR PRECEDENT.

Here Swami speaks of heeling Trump from Ahole to Be whole.

And, again, here’s Swami Beyondananda on a very cool panel.

Getting back to the blog title I came up with this morning, inspired by last night’s insightful comedy by Swami Beyondananda: WFT? – What’s Trump For?

I meditate that Trump is a fun house mirror, drawing humanity’s deepest negative energies to the surface for healing. That the Brooklyn bad boy is here to show us all that rules are made to be broken.

OK, that’s all I can muster during the stench of his newly minted tax scandal and mocking of Ford to get a man accused of being a drunken rapist onto the Supreme Court. I send Trump and his loyal as hell followers love while I break a sweat and make a run for toilet.